While more production companies are now making drama series in Australia, they are making substantially fewer than they were in 1999 and foreign conglomerates are taking a bigger share of the drama pie says new research led by QUT. And it’s only going to get worse.

The Australian Television Drama Index report concludes the available drama production work and revenue are increasingly diluted, and that the diminished priority on drama from commercial broadcasters hampers the production of series foremost for Australian viewers.

The report was produced by the Making Australian TV in the 21st Century research team, which is funded by an Australian Research Council Discovery Project Grant, and a collaboration between researchers in QUT’s Digital Media Research Centre (DMRC) and the University of the Sunshine Coast. It used data from Screen Australia to review the changing landscape of Australian drama production between 1999 and 2019 and covers drama programs broadcast by free-to-air, subscription, and video-on-demand services.

“We found there are now twice as many production companies making drama in Australia than there were in 1999 – but together they are sharing 20 per cent fewer broadcast hours,” said Professor Amanda Lotz from QUT’s DMRC.

“Of the production companies with drama titles broadcast in 2019, exactly one half had produced six hours or fewer and 94 per cent produced fewer than 20 hours. So, companies are either short-lived or exist with a multifaceted portfolio of work that includes factual or feature production, or advertising and online production work.

“A healthy production sector prioritises diversity and sustainability, but it is difficult to accomplish both at the diminished level of production now characteristic of the sector.”

Co-author QUT’s Professor Kevin Sanson added another area that should be of concern to our governments is the scale at which Australian drama producers have been absorbed into foreign conglomerates.

“Such acquisitions raise questions about the extent to which Australian stories continue to feature in their productions, although they continue to access significant sums of Australian supports. They also leave local companies in a position of being without the significant resources provided by such conglomerates. 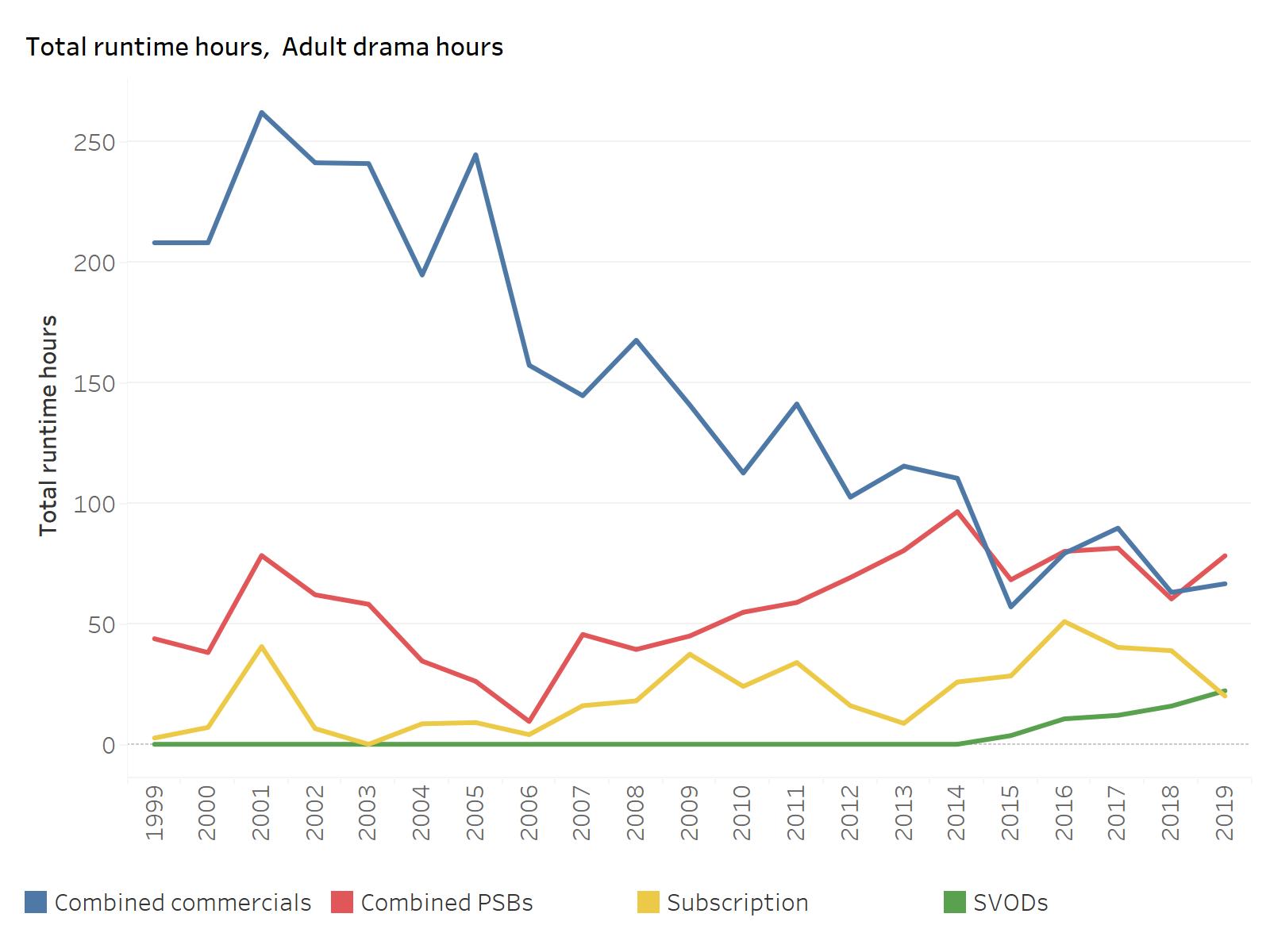 “Australian policy does not prioritise Australian-owned companies in the allocation of funding supports and unreliable criteria are used to determine content as ‘Australian.’”

The report also revealed the extent to which commercial broadcasters’ contribution to Australian drama has diminished.

“More than anything else, it is the decrease in adult drama hours commissioned by commercial broadcasters that reshaped Australian television drama between 1999 and 2019, as broadcasters responded to the audience fragmentation and cost increases from the introduction of multichannel services,” said Professor Lotz.

“The fall in hours is not so much due to a change in the number of titles being produced but the number of episodes per series – commercial adult dramas dropped from an average of 21 episodes per title in 1999 to just seven in 2019. That’s a 60 per cent decrease.

“Despite the ABC expanding its role in drama production, and drama commissions from streaming services such as Netflix and Stan now matching Foxtel’s commissions, together they commission only a fraction of what commercial broadcasters provided in the early 2000s. Combined, these new sources of drama production do not come close to replacing the steady falls in what commercial broadcasters offer.”

Anna Potter, Associate Professor of creative industries, at the University of the Sunshine Coast added that although children’s production remains quite level across the 20 years thanks to quota requirements, live-action hours have been well overtaken by animation since 2006.

“Even more concerning, in 2020, the government removed children’s content quotas which is likely to lead to a significant decline in drama production,” said Associate Professor Potter.

“We also see that more production companies are creating Australian drama but very few of these companies are sustainable in producing drama alone.

“We hope our report can be taken into consideration for future policy decisions on the subject.”